AmazingRibs.com is supported by our Pitmaster Club. Also, when you buy with links on our site we may earn a finder’s fee. Click to see how we test and review products.

Create succulent ribs on the smoker or grill by marrying water and fire in this recipe for sous-vide-que St. Louis spare ribs.

Sous vide and steaks go together like Fred and Ginger, or soy sauce and ginger, but there is so much more to explore when it comes to the world of sous-vide-que. Take, for example, our namesake — ribs.

We all love ribs and I actually consider myself to be a pretty darn good rib cook with trophies to prove it. But is it possible to turn out “amazing ribs” using sous-vide-que?

To find out, I first had to decide on a proper time and temperature for the water bath. After consulting a few experts and taking into account various data including this study by our friend J. Kenji Lopez-Alt at SeriousEats.com, I opted for 150°F (65.6°C) for 24 hours. This is also in line with our sous vide que time and temperature guide here.

Explore the world of Sous Vide Que, the ultimate marriage of water and smoke, by clicking here to download our ebook “Sous Vide Que Made Easy” for $3.99 on Amazon (free Kindle app runs on all computers). Or get the book and others FREE as a member of the AmazingRibs.com Pitmaster Club. Click here to join.

The real issue, though, was how to add enough smoke to replicate a traditional low and slow rack of ribs. While other recipes rely on liquid smoke, my earlier experiments had shown that finishing the meat on the grill over indirect heat for 15 to 30 minutes could provide the perfect touch of smoke for that true BBQ flavor. Yep, that’s all it takes!

In my experiments I also explored chilling food after the water bath so that it could be finished at a later point. Building upon that, I decided to see if the chilling step had any effect on the overall flavor of the finished product. One half of the rack of ribs was chilled before grilling while the other half went straight on the grill for a side-by-side comparison.

Each dry brined half rack was placed in a sealable freezer bag, and cooked in a 150°F (65.6°C) water bath for 24 hours. Note that the half that was to be chilled was started 30 minutes early so that both portions could be finished on the grill at the same time.

To finish the ribs, the grill was prepared for 2-zone cooking, placing a charcoal chimney full of pre-heated charcoal briquets to one side of the grill’s charcoal grate in order to create direct and an indirect cooking zones. Two chunks of cherry wood were also added to the charcoal for smoke flavor. As the cooker came to temperature, the ribs were removed from the bags, patted dry, and seasoned with Meathead’s Memphis Dust. Once the grill was ready, the sections from the cold and warm water baths were placed on the indirect side of the grill. The lid was added (with the top vent fully opened and positioned directly above the ribs in order to force the smoke over and around the meat) and the ribs smoked for exactly 30 minutes.

After smoking for 30 minutes, both sections of ribs were sliced and served. On texture/tenderness, I would easily score them 9s (the best possible score) in a Kansas City Barbeque Society contest.

On flavor, the 24-hour water bath helped the dry rub to flavor the meat and the 45 minutes of smoke was just enough to put the ribs on par with those cooked exclusively on the smoker or grill. That’s because smoke sticks best to cool wet surfaces. As for the chilled and non-chilled sections of ribs, there was zero notable difference between the two. As such, it is fair to say that there is no downside to (properly) chilling foods after the water bath so that they can be finished at a later point in time.

Finally, while these could easily be called “perfect ribs,” the time involved makes me hesitant to recommend this as a preferred method of preparation. If, however, you’re looking for a great way to cook ribs ahead for say a tailgate party or picnic, simply sous vide the ribs and chill them so they can be reheated on the grill for 45 minutes when you are ready to serve. 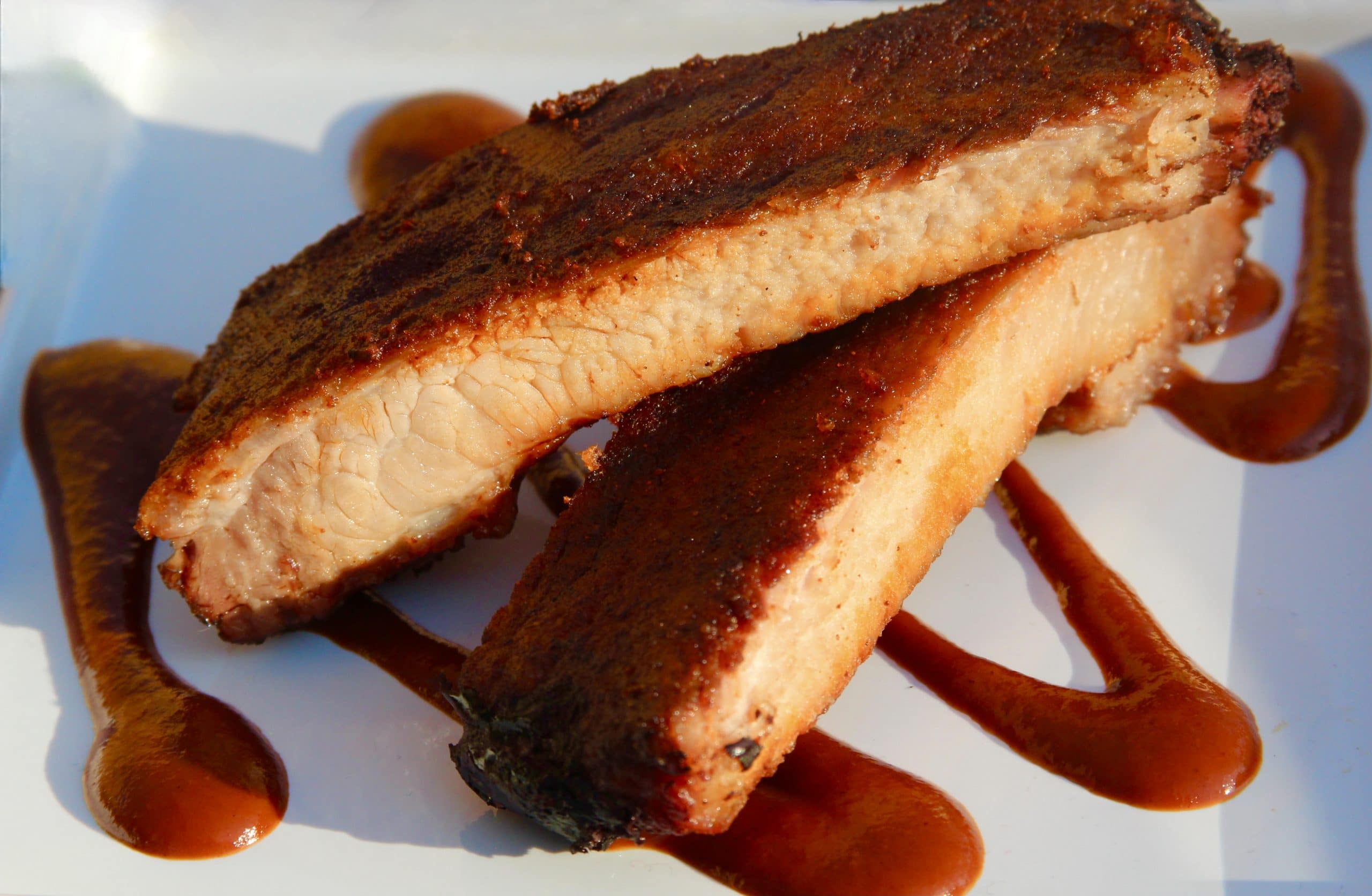 Tried this recipe?Tell others what you thought of it and give it a star rating below.
3.89 from 160 votes
Print Recipe Pin Recipe
Create succulent ribs on the smoker or grill by marrying water and fire in this recipe for sous-vide-que St. Louis spare ribs. By starting them in a low and slow sous vide water bath, the ribs are rendered moist and tender before they're finished on the grill for that smoky flavor we all love in traditional BBQ ribs. You can use any cut of ribs.

Serve with: Your favorite ale or pilsner.

US Customary - Metric
Notes:
About the salt. Remember, kosher salt is half the concentration of table salt so if you use table salt, use half as much. Click here to read more about salt and how it works. For this recipe, you want to use 1/2 teaspoon Morton coarse kosher salt per pound (453.6 g) of meat.
Metric conversion:

These recipes were created in US Customary measurements and the conversion to metric is being done by calculations. They should be accurate, but it is possible there could be an error. If you find one, please let us know in the comments at the bottom of the page

So long as you have food in your mouth, you have solved all questions for the time being.

High quality websites are expensive to run. If you help us, we’ll pay you back bigtime with an ad-free experience and a lot of freebies!

Millions come to AmazingRibs.com every month for high quality tested recipes, tips on technique, science, mythbusting, product reviews, and inspiration. But it is expensive to run a website with more than 2,000 pages and we don’t have a big corporate partner to subsidize us.

Our most important source of sustenance is people who join our Pitmaster Club. But please don’t think of it as a donation. Members get MANY great benefits. We block all third-party ads, we give members free ebooks, magazines, interviews, webinars, more recipes, a monthly sweepstakes with prizes worth up to $2,000, discounts on products, and best of all a community of like-minded cooks free of flame wars. Click below to see all the benefits, take a free 30 day trial, and help keep this site alive.

1) Please try the search box at the top of every page before you ask for help.

2) Try to post your question to the appropriate page.

3) Tell us everything we need to know to help such as the type of cooker and thermometer. Dial thermometers are often off by as much as 50°F so if you are not using a good digital thermometer we probably can’t help you with time and temp questions. Please read this article about thermometers.

4) If you are a member of the Pitmaster Club, your comments login is probably different.

5) Posts with links in them may not appear immediately.

These are not ads or paid placements. These are some of our favorite tools and toys.

These are products we have tested, won our top awards, and are highly recommend. Click here to read how we test, about our medals, and what they mean.

Use Our Links To Help Keep Us Alive

A big part of this site is our unbiased equipment and product reviews. We love playing with toys and we have no problem calling them the way we see them. Some companies pay a finder’s fee if a reader clicks a link on AmazingRibs.com and buys a product. It has zero impact on our reviews, zero impact on the price you pay, and the sites never tell us what you bought, but it has a major impact on our ability to keep this site alive! So before you buy, please click our links. Here’s a link that takes you to a page on Amazon that has some of our favorite tools and toys: https://tinyurl.com/amazingribs


Winner of the National BBQ Association’s product of the year award. This 8.5″ x 11″ magnet contains more that 80 benchmark temperatures for meats (both USDA recommended temps as well as the temps chefs recommend), fats and oils, sugars, sous vide, eggs, collagens, wood combustion, breads, and more. Although it is not certified as all-weather, we have tested it outdoors in Chicago weather and it has not delaminated in three years, but there is minor fading.

Fireboard: The Ultimate Top Of The Line BBQ Thermometer

With the ability to monitor up to six temperatures simultaneously with either Bluetooth or Wifi on your mobile phone, tablet, or computer, Fireboard is the best digital thermometer we’ve tested.
Click here to read our detailed review


Surely you know somebody who loves outdoor cooking who deserves a gift for the holidays, birthday, anniversary, or just for being wonderful. There he is, right in the mirror! Here are our selections of best ideas, all Platinum or Gold Medalists, listed by price.

The Cool Kettle With The Hinged Hood We Always Wanted


Napoleon’s 22″ Pro Cart Charcoal Kettle Grill puts a few spins on the familiar kettle design. In fact, the hinged lid with a handle on the front, spins in a rotary motion 180 degrees. It’s hard to beat a Weber kettle, but Napoleon holds its own and adds some unique features to make the 22″ Pro Cart a viable alternative.

Click here for more about what makes this grill special

Blackstone Rangetop Combo: Griddle And Deep Fryer In One


The flat top does the burgers and the fryer does the fries. Use the griddle for bacon, eggs, grilled cheese, and so much more. And why deep fry indoors when you can avoid the smell and mess by doing it outside!

Click here to read our detailed review and to order


GrillGrates(TM) amplify heat, prevent flareups, make flipping foods easier, kill hotspots, flip over to make a fine griddle, and can be easily moved from one grill to another. You can even throw wood chips, pellets, or sawdust between the rails and deliver a quick burst of smoke.

Click here for more about what makes these grates so special

The FireBoard Spark is a hybrid combining instant-read capability, a cabled temperature probe, Bluetooth and Wi-Fi connectivity. We gave Spark a Platinum Medal for pushing the envelope of product capability while maintaining high standards of design and workmanship.